We withdrew our eldest two sons, Anthony and Mitchell, from school back in 2000. What a leap of faith that was!

We had to get out of the system after the havoc it had wreaked on our boys. Even our pre-schooler, Jeff, had been negatively affected as most of his life had been lived in a family under stress.

We agonised over the decision. Home education looked so risky, radical and unproven. I wasn’t sure I was ready to take the full responsibility for educating our children.

The school situation just got so bad that we had to do ‘something drastic’. The decision was researched and carefully considered but was also a matter of desperation. The boys weren’t learning at school, they didn’t have friends and their behaviour was atrocious. To be honest, so was mine – my parenting style resembled John Wayne subduing the enemy as I battled the boys out of the house and off to school each day. After school was an endless round of tears, tantrums, homework, ‘time out’ and bed battles. I took the Parent Effectiveness Training course but initially it just made me think I was a failure.

Home education was the other side of the fence. Even if it wasn’t as great as we hoped, we figured life couldn’t get any worse. I was reasonably confident on the learning front; the two boys had both spontaneously read before starting school, and their maths was above grade level. My time spent in the classroom had convinced me they weren’t being taught much they didn’t already know. I was sure they could learn more interesting stuff at home.

We took a deep breath and pulled the boys out.

The initial adjustment phase was tough – all that bad behaviour that we’d endured in out-of-school hours now had all day, every day to expand into. I met some other home educators and envied the relaxed relationships and lifestyle they had. Life wasn’t yet any better for us, but I began to think it might be. Doubts lingered.

Other home ed mums seemed to have it together. Their kids actually listened to them – their families even seemed to like each other! I spent all day trying to get my guys settled so I could have five minutes away from them. Every time I tried to get away, I had to come back with all guns blazing to try and restore order.

Gradually we settled into the home ed lifestyle. After a couple of months, the boys actually played together without incident for up to an hour at a time. One of them joyfully announced that he was making friends with his brother again. The neighbours commented on how much healthier they looked. Wow, this was bliss! We were all happier, but …

The American home ed literature said to allow a month of recovery time for every year children had been in school. I really wanted to give natural learning a try, and I was reluctant to jeopardise our new found peace by introducing a school-at-home regime. I held my breath and waited.

Right on cue, four months after leaving school, Anthony expressed an interest in learning about the planets. Off we went to the library, and he began a huge astronomy project. Wow, natural learning works!

We went to exhibitions and home ed activities, watched documentaries and movies and talked endlessly about everything under the sun. I became less bossy and more understanding. My Parent Effectiveness Training started to pay off. I stopped flip-flopping between model parent and John Wayne and talked to the boys reasonably. I learned to stand back respectfully and let them play and learn. I watched them learn through play every day from the moment they got out of bed. Through play, both they and their toys took on roles from fiction and history and coped with earthquakes, wars, family upheaval and everyday life. We joined the local homeschool group and the boys found playmates there. They were learning, I was enjoying my part in the process and we weren’t alone on the journey, but…

Life and learning went on, and I was reluctant to rock the boat by changing anything when things were going so well. The years slipped by in what I now look back on as the glory days of home education. Most of our week was spent at home in days of endless play. We had home ed group fortnightly, a weekly shopping and library trip, and science workshops once a month. At home we read lots, and we cooked, played board games and messed about with science activities. The boys’ endless imaginative games had developed into what they referred to as ‘the episodes’. Each of them had a game in which the three of them had a role to play, and they took turns to play an episode of each game. Whole days were spent in this way. At some stage, they decided to develop the episodes into books and board games. Around the same time, they started family newspapers and magazines. Life was good, they had become a unit, they were producing work, but…

There were 20 children in our street, and – because I was a mum at home – after school, on weekends and during school holidays our house was full of kids. Either I was minding them, or they just ended up here because there was always something happening. The whole tribe came to our place, played games, dragged out the dress-up box and made movies. The movies became more complex, and the boys started script writing and story-boarding. There was still the reading worry about Jeff. Everyone I respected in the home ed world said, ‘Don’t worry. Just wait, it will happen.’ But…

As it turned out Jeff didn’t read spontaneously as his older brothers had. Maybe he would have if we’d waited long enough, but he got sick of waiting so we used the phonics approach from Why Johnny Can’t Read, and he was reading independently five weeks later. So now they could all read, they were all happy, they were all learning. All my worries were over – except that as the neighbourhood friends started high school, one by one they stopped coming to play and our house was much quieter. The boys still had each other and were working on fabulous movie projects based on their books, but…

I found some maths tests and persuaded the boys to complete them. I discovered that they could easily do what was expected for their respective grade levels. I toyed with the idea of getting more formal, although we were all too busy learning to follow through. To ease my worry about maths we agreed on an hour of maths per week. But…

A cousin introduced the boys to computer games. I worried that it would be the end of everything. For several months all they wanted to do was play those games, and much of their lengthy imaginative play went by the wayside because one of them was always on the computer and the others were just filling in time, awaiting their turn.

I set time limits and insisted on hourly screen breaks and that they get some exercise. The computer game obsession passed, but computer time became a regular feature of their days. After a while I did notice the learning involved. They learned history while playing Carmen Sandiego, and computer time also developed skills in typing, file management, word processing, desk top publishing, spreadsheets, presentations and movie production. I began to realise that they will spend their adult lives in a world in which computers are much more prevalent than in my generation and that their computer time prepares them for that. Perhaps it contains more learning than people of our generation appreciate. We tend to think of reading time as valuable and educational but computer time as frivolous. Back in the 1700s reading novels was considered frivolous but the recommended alternatives — reading Fordyce’s Sermons, for example — have certainly fallen from favour these days.

Gradually the boys’ writing projects became more ambitious and sophisticated. At the same time, Anthony’s interest in science became more serious, and let loose on the Internet he found science websites, blogs and podcasts from all over the world. He made long lists of science books he’d like for presents. Okay, higher subjects didn’t seem to be an issue, but…

Anthony was too busy learning so we let the idea simmer for a couple of years. In the meantime he began writing a history of astronomy, a book which grew to gargantuan proportions. He was visiting astronomy websites daily and often knew astronomy news before it hit the mainstream media.

His brothers continued to play for hours, but one of the team was far less available. They still planned and wrote movies together, but their projects were so ambitious (for example, a three-hour murder mystery), and filming days so infrequent and complex, that they aged noticeably between scenes.

In the meantime, Anthony decided to start on some subjects with Open University Australia (OUA) and excelled. The most difficult part was adjusting to deadlines and resisting the temptation of interesting tangents. So university level work didn’t seem to be a problem, but…

Getting in to university turned out not to be a problem. Two OUA units with excellent results were enough, and he went part-time in order ot continue his autodidact study. He has spent this year getting excellent uni results with time left over for his voluntary job and to study science and politics in the self-directed way he always has.

Meanwhile I’ve moved on to my next set of doubts:

I continue to climb my ladder of doubts. Old doubts are left behind, and new ones crop up all the time. I’ve come to accept that doubt is part of the journey. I just deal with one rung at a time. The next rung on the ladder is sometimes within easy reach and at other times seems to require acrobatic finesse. Sometimes the ladder feels more like a spiral staircase when I revisit the same doubts at a higher level. I’m sure you have your own ladder of doubt to climb no matter where you are on the home ed journey.

Doubts are useful. They help us to consider, examine and re-examine our home education and assess whether something needs to change. Sometimes we decide to leave well alone, and sometimes we decide it is time to make changes to take our home education to the next level. In likening the doubts to a ladder, I may have made home education sound like a long hard slog in mid-air. On the contrary, it is more like an adventure playground with fabulous lookouts, interesting challenges, cosy cubbies to curl up in and interesting spaces to explore. Home education is sometimes challenging but the views have been worth the climb. 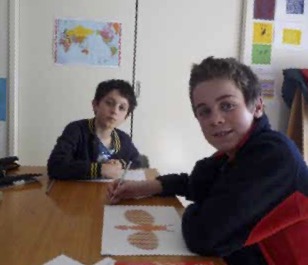