Home educating teenagers is not that hard 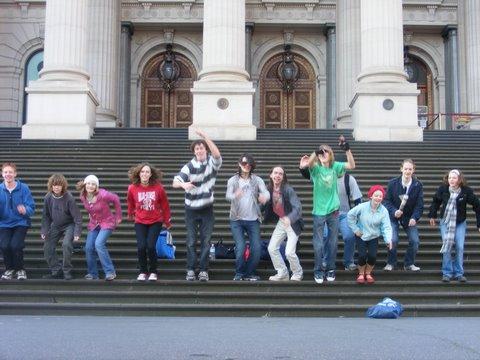 Home educating primary-aged children was easy as far as I was concerned. I spent time with them, read to them, played games with them, talked lots, encouraged their interests, took them to interesting places, and stood back and watched the learning happen.

But home educating teenagers? I knew nothing about that! That would be hard – what about the Maths, what if they wanted to learn Physics, Chemistry, Biology? Ahhhggh – I’d be out of my depth!

But the funny thing about kids is that they grow up sneakily while you are busy with everyday life. One day I found myself talking to a journalist who was putting together a radio show on home educating teenagers and needed a family to take part. She asked how old my children were and I replied, “Oh… fourteen, twelve, and ten,” and she asked me to do it. That’s when I first realised I was home educating a teenager.

Change came gradually though, not in one fell swoop. There was no single moment when I started home educating teenagers; it just sort of crept up on me. Birthdays came and went and there were no thunderbolts of change. Obviously, kids just get one day older each day. Interests, habits, abilities and knowledge all grow and change gradually. Sometimes, at the granular level of focusing on each day, it is easy to lose sight of the larger picture of growth and maturation which is only noticeable when you look at the long-term trend — just like with growth charts.

It is easier firstly because everyone is older, more independent, and more helpful. This applies on a practical level as well as an academic one. The days of the demanding physical parenting (lifting & carrying children, managing fractious children in the supermarket, and having children fighting over who got to sit on my knee) were long gone. Instead of creating so much work for me (spilling their juice, sloshing bathwater all over the floor, tramping in mud etc), they actually helped out around the house and their help was real help, not the kind of help they gave when they were little. I remember the days when they volunteered to clean the windows and I didn’t want to discourage them, but had to think twice about whether I really had time to finish the job and wash the floor afterwards. Even though these are practical and parenting issues, they are very relevant to the ease of home education as we spend more time parenting and housekeeping than the average parent.

Teenagers can be left home alone. On a practical level this simplifies life a lot.  If one of us had an appointment, it didn’t mean everyone had to go, and it didn’t mean occupying three children  in a waiting room for an unknown amount of time.

In many ways the hard parenting years were also over – in terms of struggling with young kids who were very insistent about what they needed or wanted but often not so good at allowing for other people’s needs.

The academic side wasn’t hard either. After years of natural learning, my teenagers could all read and write and do maths proficiently and pursue their own interests. Gradually, their skills built up over time with peaks and plateaus along the way and with different strengths according to interest and ability. Kids don’t leap straight into Calculus straight after learning their numbers — there is a progression of skills and knowledge in between, not a gigantic leap. Some teenagers are never going to want to learn Calculus either — remember that if they were in school they would have the option to drop Maths before that stage if they wished.

I was never worried about the humanities subjects as they are primarily a matter of discussion of interesting topics and then, writing about them is just a matter of formulating facts and opinions into a written form and refining and improving on the result. The important thing in humanities is the understanding and discussion of concepts and, by the time home educated kids become teenagers, they have spent years having fantastic conversations about all sorts of things — current events, movies, books, history, the environment… the list goes on and on. Consequently, they are very good at articulating their opinions — this is a head start in humanities.

Science and Maths subjects did worry me, however, as I had no experience in Physics, Chemistry, Year 11 and 12 Maths and Astronomy. All these subjects turned out to be very accessible to motivated kids with no adult guidance. Our local library and the Internet helped immeasurably. There are some fabulous science resources on the Internet and many of them are free — chemistry podcasts, scientific blogs, university lectures, vodcasts and so on. Teenagers can find much of this for themselves. My eldest son, a science buff, borrowed many scientific books from the library (and requested them as presents) and subsequently followed up the authors online. One website led to another and he found some great ones, downloaded hundreds of hours of science podcasts and read loads of transcripts of science programs. That is not to say there is no adult involvement – of course I read and discussed books my son recommended. I also bought and borrowed many books and DVD documentaries of interest. A subscription to Cosmos magazine provided a lot of scientific reading. Suddenly I was learning more about science than I had ever known before. It was mind-stretching, but in a stimulating rather than stressful way.

For our family, basic maths skills were covered easily in everyday life in the primary years and built on with popular maths books — which one son read more of than the others. A quick check once a year revealed they kept up with the school curriculum in this way.

It turns out that home educating teenagers naturally is not all that different to home educating primary-aged kids or indeed preschoolers: you spend time with them, recommend and share books, play games with them, talk lots, encourage their interests, take them to interesting places, and stand back and watch the learning happen.

I’d been doing this for years, the only difference with teenagers was that the interests, abilities and output had changed. Teenagers teach themselves, they learn from each other, they learn from conversation and experience, they learn from parents, and they teach us a thing or two.

Gradually over the years my sons each started to play less; and read, produce, and research more. Their interests deepened and they became more independent in their pursuit of knowledge. I never needed to know everything my boys wanted to learn – all I had to know was how to find out. I could use a search engine and I could use an index and the boys had known for many years that these were valuable tools — by the time they were teens they had long been independent about using them. Following their interests meant they practised academic skills without even being aware of doing so. I don’t remember teaching them to use the computer any more than I remember teaching them how to eat. They must have learned one little skill at a time. By the time they were teens they could use all the common workplace programs — Word, Excel, PowerPoint, and Outlook and also some less common ones like Microsoft Publisher and Movie Maker. I showed them a few things when asked but mainly they just experimented and found out things for themselves — in some cases so well that they could teach me how to use them. My sons taught me how to animate slides in PowerPoint, for example.

I think the hardest thing is handling the doubt and the panic attacks – those nights when I woke at 3.00 a.m., sat bolt upright in bed, heart pounding, and thought, “What the hell I am I thinking of? I may have ruined my children’s future!”

The truth is, the doubts were always there, but were reassured by the fact we could always put the boys back in school “if it doesn’t work out,” but once they were teenagers, this time seemed to be running out. It became a matter of holding my breath and hoping they could go on to university and work as they wished and survive in the world. This gave more urgency and potency to the doubts.

To deal with them I reminded myself that mainstream parents are not immune to worrying about the future. They worry about whether their children will do well in VCE, whether they will get the required ATAR, and about how they will go at university or at work. My worry was somewhat isolating because I felt that if my children’s educational prospects all came crashing down now, I would be to blame.

Home educated teenagers worry too – about what they really want to do, about the free natural learning time running out, about how they’ll get into university and whether they’ll be up to it and able to avoid going off on interesting tangents.

We made an effort to talk about our concerns openly and take steps to deal with them. For example, despite having relied on natural learning for years, my eldest son decided to do an hour of Maths each week as part of his transition to university to reassure himself that he really had covered Year 12 Maths. My younger sons weren’t as interested in Maths so I feared they would not get to that level naturally. I asked them to do half an hour of Maths per week and they were willing to do so.

Fast forward a few years and my sons are young adults; they had no trouble getting into university.

So home educating teenagers works. Just keep doing what you’ve always have done – respond to their needs and abilities and continue to provide interesting resources and facilitate lots of stimulating experiences. The future will take care of itself.