It is the most boring of all the objections to home education and seemingly the most stupid since, on all the evidence, home educated children are the best socialised. So why do they do it and why do we buy into it? Within 30 minutes of my taking my daughter out of school the usual ignorant bully from the education department, together with a social worker, was knocking on my door. I have a short way with departmental people but as they were leaving the social worker looked at my young son, who was still in nappies and playing on the ﬂoor and said, “If you home educate him he will grow up to be a homosexual”! This was in the homophobic countryside of Derbyshire in the 1970s. He must have known that such a statement was nonsense, so what was he trying to do? He was trying to frighten me into shutting up, sitting down and conforming to my socialisation.

Primary socialisation takes place in the family and, while the number of dysfunctional families is increasing, most are still places of love and nurture and the best environment for young children. It is the love, patience and particularity of mothers that makes them so. Fathers love, too, but our culture has given them a different, complementary, but also fundamentally important role. For most of history and for most people that socialisation has been enough but with the coming of industrialisation and the demands of the machine more was thought to be needed.

Machines require a strong sense of personal responsibility and reliability in their minders and operators. The only people to ﬁt this mould at the time were non-establishment protestant Christians [Walker, P. G. (1966)]. However, there were not enough of them and something else had to be done. The churches were quite happy to combine with the mill owners, etc., to start and run schools where a form of Christianity and the protestant work ethic were inculcated and the children socialised in such a way as to tie them to the machines of the industrial revolution. Eventually governments decided that they could manage without the social conscience of the church and they established the state school system. It wasn’t as good as the church schools and it was only when they promised education that was “free, secular and compulsory”, while at the same time starving the church schools of funds, that the state system took off [Barcan, A (1988)]. Very shortly afterwards the “free” aspect changed but by then there were no challengers. Secondary socialisation, then, is learning about all the subsections of wider society, especially those related to work and the economy.

Home educating parents have their own way of dealing with this level of socialisation. They take their children to various places in the community where real work is happening and they interpret what is going on there or they ﬁnd a better informed person to do it for them. Instead of doing science classes where the answers are in the back of the book, or woodwork, they visit university research labs or commercial physics labs and furniture factories, etc. There is a world of difference between what goes on there and what happens in school.

In addition, home educated children get used to the work force by working at a wide range of jobs themselves. Sometimes they only work for a short period, in what are called internships – a sort of extended, unpaid work experience during which they expect to learn some aspect of the industry or trade they are working in.

At the turn of the 20th century, John Dewey thought that learning directly from the workplaces of a community would be too difﬁcult for the children of his time, so he argued for a sort of simpliﬁed model of wider society called school where children could learn.

There are a couple of questions, however. First, what do teachers nowadays know about work in the real world? Most go straight from school to university and then into teaching, so the answer is “not much!” Second, what does one learn in school?

New since Dewey’s time has been the attitude that all social ills can be solved by “education” and a signiﬁcant part of school-based socialisation is composed of psychosocial processes designed to make children unresisting and conformist subjects of the prevailing state ideologies.

Csikszentmihalyi (1992) writes of the purpose of this system of secondary socialisation in more recent times as follows:

The essence of socialisation is to make people dependent on social controls, to have them respond predictably to rewards and punishment. And the most effective form of socialisation is achieved when people identify so thoroughly with the social order that they no longer can imagine themselves breaking any of its rules [page 17].

When that social worker told me that my son would become a homosexual he was trying to drive me to conformity by making me afraid, and fear at all levels in society has become a primary tool for manipulating populations. All those things that home educators dislike about school [Barratt – Peacock, J. (1997)] and that cause them to withdraw their children are small, local applications of the features of society that adults live with. All the artiﬁcial motivations that schools offer successful, though not necessarily intelligent, students are microcosms of the motivations of the adult society.

Ivan Illich (1974) describes the whole system as a form of certiﬁcate capitalism in that the more knowledge you have the more reward you can demand from society in higher wages and status. However, the only knowledge that is valued or recognised is that which society selects and identiﬁes with school certiﬁcates and degrees, etc.

I don’t dispute the truth of claims made by home education research that home educated children are better socialised and do better academically. I can understand that it is smart to respond in terms that our opponents recognise, but I have come to wonder whether we are wise to adopt those goals for ourselves. One home educating mother said that far from needing a certiﬁcate of exemption from the Education Department allowing her to home educate her children, the department should be required to obtain a certiﬁcate from parents to allow them to enrol the children in school. I like that!

When I was ﬁrst considering home education nearly 36 years ago and listing my reasons, I came to the conclusion that what I wanted for my children had nothing to do with what schools emphasise. My interests had to do with character and personal fulﬁlment as my children received from, and gave to, others in their society. My goals were written down in that form.

Very much later, when I came to conduct research on Australian home education, I found that a surprisingly high proportion of home educating families shared a similar set of values and similar priorities even though they came from a very wide range of backgrounds and each family held views that were very different from the others.

Csikszentmihalyi (1992) argues that society has learned how to tap into our basic biological needs, such as survival and fear, to assist it in making us work for its goals. He goes on to write:

Caught in the treadmill of social controls, that person keeps reaching for a prize that always dissolves in his hands. In a complex society, many powerful groups are involved in socialising, sometimes to seemingly contradictory goals. On the one hand, ofﬁcial institutions like schools, churches and banks try to turn us into responsible citizens willing to work hard and save. On the other hand, we are constantly cajoled by merchants, manufacturers and advertisers to spend our earnings on products that will produce the most proﬁts for them. And the underground system of forbidden pleasures run by gamblers, pimps and drug dealers, which is dialectically linked to the ofﬁcial institutions, promises its own rewards of easy dissipation – provided we pay. The messages are very different but their outcome is essentially the same; they make us dependent on a social system that exploits our energies for its own purposes [page 19].

I see nothing wrong in working for external goals to get the things I want, nor do I see anything wrong with putting off immediate gratiﬁcation in order to gain a better end result. However, I do want my family to be free to choose when and how we will co-operate with society and when we will withdraw. I have, therefore, chosen home education as an extension of that ﬁrst, personal and positive socialisation.

A common theme I found among home educators who had migrated to Australia from other cultures and societies was an awareness that they could choose what they would keep of their old society and what they would take from the new. These would then be blended to make an entirely new experience and family culture with the best of both worlds. I like that and I don’t think you have to be a migrant to experience it. It is something we can all do through home education as we socialise our children from a family base into citizens of the sort of society that we would like to live in. (Who knows? In that way we may even be working to bring it about.)

I think it was the philosopher J. S. Mill who wrote,

No great improvements in the lot of mankind are possible until a great change takes place in the fundamental constitution of their modes of thought.

I believe that home education produces just such a change because the children so often do things just because they are interested or challenged rather than for a fridge magnet or a mark. They do them until they are ﬁnished, not until the period ends. They get so focussed in what they are doing that they lose track of time. They also work cooperatively toward common goals with people of greater and lesser skills.

They are valued and contributing members of their families and they take part in the ongoing family conversation.

This experience has many positive outcomes, but in terms of personal fulﬁlment and happiness I have observed that children who live in such an environment are more likely to interpret what happens to them in a positive and conﬁdent way. Like the migrants, they take time to interpret and make the best of things. This is another way of saying that they are truly free and independent thinkers. If there is one secret for success and happiness it is the ability to respond to what happens in such a way that experience produces its own intrinsic and empowering rewards no matter what society tries through its extrinsic controls.

Are home educated children socialised? Oh Yes! They are truly socialised, but because they have different perspectives, they are not easily “controlled”, they can choose in ways that society has not yet thought of and make contributions that society has not pre-programmed by limiting the imagination and minds of children through schooling. In this way they remain part of society, but as free people, not subjects.

Barratt-Peacock, J. (1997) The Why and How of Australian Home Education. Bundoora, Vic 3083, Australia, La Trobe University. Available in the HEN shop 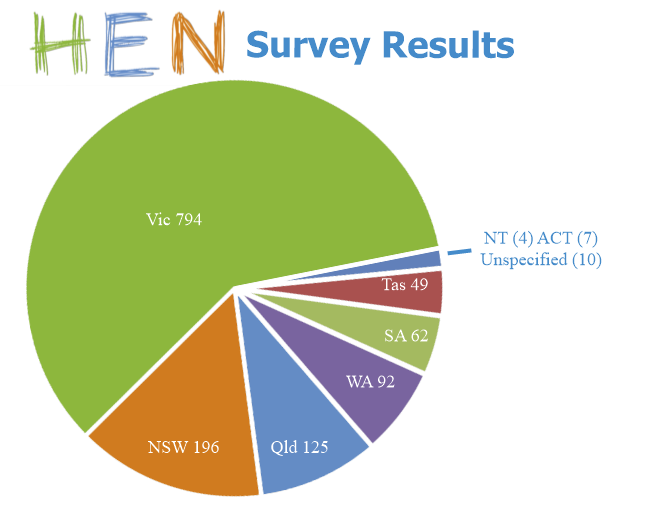