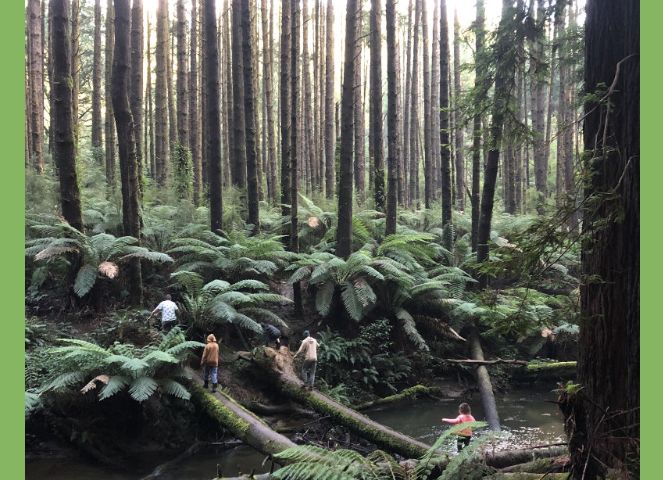 As part of our home ed lifestyle, I love to spend time at interesting outdoor places – the beach, the bush, going for a walk, finding a waterfall, exploring rock pools, playing in creeks – anything like that. It’s as good for the kids as it is for me. I don’t think about what our next meal is or what housework needs tackling. The kids are free to explore and move as they like and are (usually!) happy to have an adventure. We always enjoy our time outdoors. But sometimes it can be tough to get them out of the house!

Sometimes these kids of ours don’t want to go out. It can be tricky to please seven (or five, or three or two!) kids, each with their own ideas and desires. Sometimes some would rather stay home and watch YouTube, like they did yesterday. (Never fear, they still get plenty of YouTube watching time.)

“Come on”, I say. “It will be fun, you’ll love it. When was the last time I took you somewhere you didn’t like?”

For the most part, they enjoy the drive squished up against their siblings. I’m thinking that with three boys over six feet tall, it’s probably time we buy a bigger van…

Someone spots a KFC sign out the window. “Remember that time we bought KFC there?” he calls out, “and Joash spooked* everywhere?” Raucous laughter. Memories. Ahem. I tell one kid off for making spew noises to try to make his little sister squeal. (He’s largely successful.)

There’s a game of corners and laughter happening in the back seat… Lots of chatting, some joke telling. A few small quarrels. It’s rarely quiet.

They pile out of the car.

“There’s a waterfall here? Can we swim in it?”

“I don’t know, I haven’t been here before… it is the middle of winter…” I shrug.

“There’s a towel in the boot.”

“Can we start? They ask, as I’m suiting up the smallest.” (It always takes a little while, a quick nappy change and a puddle suit over her clothes, so at least she’ll stay warm and dry.)

We catch up to them eventually, the smallest and I. Or, they double back and find us.

“This place is awesome!” “That was so much fun!”

“We need to come back here with [insert all our favourite home ed friends!]”

“That’s okay, don’t worry about it. I guess it was because this trip was kind of unexpected. You had other plans for the day… you weren’t really sure what we were going to do… it can be hard to adjust to something different, especially at short notice. I’m so glad you came too.”

A great day was had. The towel stayed dry and in the back of the van for another (warmer?) day. Although they’ve just started watching ‘How to Swim in Ice Water’ videos on YouTube so…

**spooked. When Joash was little he was car sick one day. He announced to a friend that he “spooked” and so that is what it has been called ever since.