What does your Day on the road look like?

What does your Day on the road look like?

On June 12, we were on Day 2 of our 1000km road trip to Armidale in northern NSW. Two of my older children are studying there at the University of New England, and I was taking my five youngest up to visit them.

The day started in a caravan park in Forbes. Isabelle announced that it was three weeks until she turned 18. We were able to get away in fair time, about 8.00am, and the first stop was the Parkes Radio Telescope (‘The Dish’). We spent some time in the garden before going inside, playing with the parabolic dishes which focus whispers and send them over a distance of maybe 100m. There was also a sundial which wasn’t working as it was cloudy, and a large globe positioned with Australia at the top. There were a lot of apple trees which were scions of the tree in Isaac Newton’s garden. Inside was a display about the involvement of the Dish in the 1969 moon landing, and a model radio telescope which could be turned to point at different pulsars, and would then play the ‘sound’ they made. The children went out the back to get a closer look at the Dish, and happened to be watching when it was moved slightly.

Isabelle’s turn to drive; off to Dubbo for lunch. I missed a turn leaving town, and we were lost for some time before getting directions back to the highway. I knew there’d been drought up there, but was surprised at how many creeks and rivers were dry.

After a while we were able to see the Warrumbungles from the road. We took the Warrumbungle tourist drive, which was much longer and windier than I had expected. When we reached the information centre, seven-year-old Merryn announced that she was feeling sick, but disaster was averted by going for two short walks in the mountains. We had to carry nineteen-month-old-Anna in the baby backpack, which is no joke uphill. Isabelle had the first turn, and then I took over. Anna learnt a new noise, and was puffing away on my back while I climbed the hill. Nine-year-old Samuel was grumpy because I would not let him throw rocks. We saw some kangaroos quite close up, and were watching how they moved. They were eating, and just moving slowly. We observed that they moved both front legs forward together, then put their tails down between their back legs, and then hopped their back legs forward.

When we arrived in Coonabarabran, Merryn was getting into one of her ‘moods’. She really needed some time alone in her bedroom, but this was not possible as we had to go out and get dinner. We could not find any gluten free pizza, so had to have chicken and salad. Merryn was sent to bed for throwing shoes at people. Anna did her violin practice. She appears to have a gift for music. She sings lots of songs, twenty or more, but says very few words. Sometimes she repeats the intonation of speech without the actual sounds.

Eventually we got the children to bed, and Isabelle was pleased that there were enough beds for her not to have to share with a little sister. I tumbled into bed with Anna, the end of another big day. Or not…

At 10.30pm Isabelle woke me with the news that Merryn was vomiting. Lights on, Merryn out of bed and shivering while I cleaned up, five-year-old Tavia upset, Anna crying, Samuel philosophically asking for his book. Everyone back to bed, Tavia in with Isabelle, Anna breastfeeding, Merryn with a bowl just in case… 11.15pm. ‘Merryn’s vomiting!’ Oh, dear. 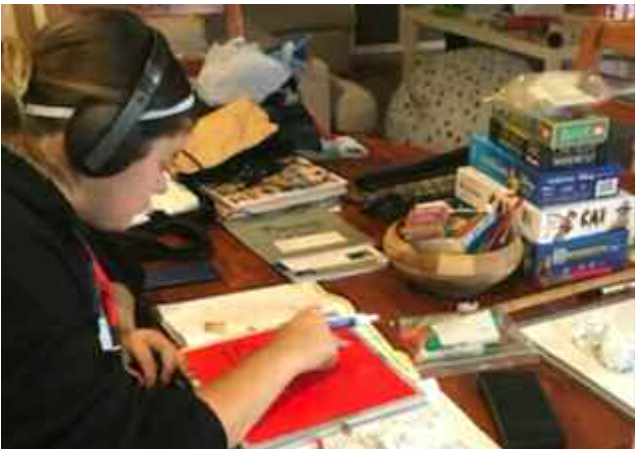