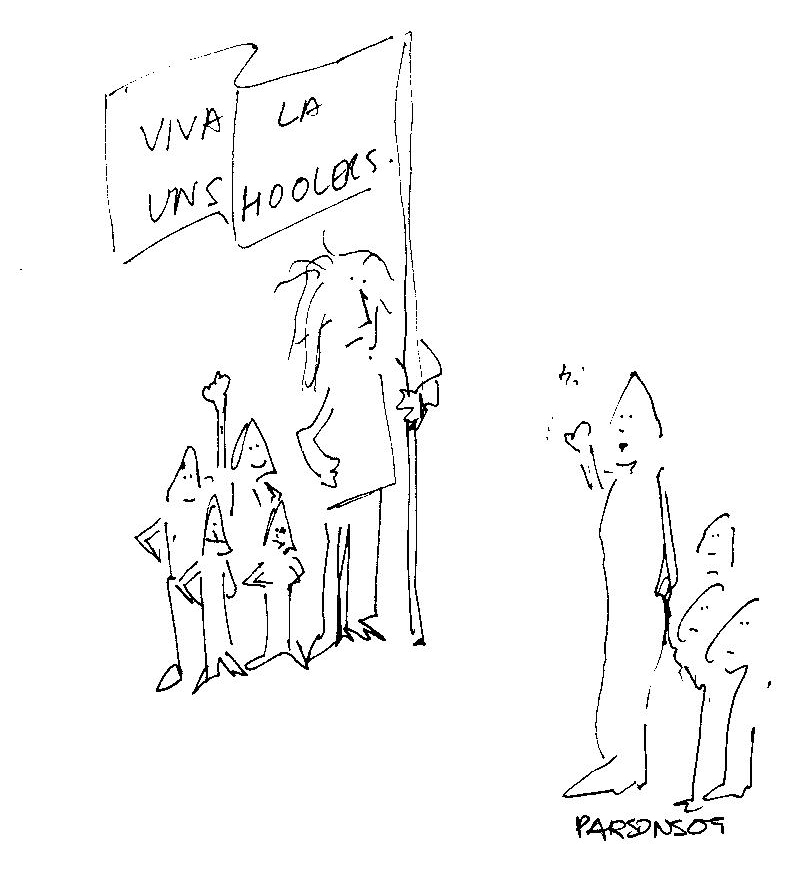 When my wife Brooke and I first met she was raising her four children as a solo Mum and had been homeschooling for the better part of a decade. My first impression of Brooke’s children was of confident, well spoken kids (on their best behaviour to be sure after Mum made it clear that this one was a “keeper”).  As I got to know them better I noticed that the poise and manners they exhibited were not just trained superficial responses but indicative of a much deeper sense of themselves; a self confidence that was as unusual as it was refreshing.

Given that our first year together included such highlights as immigration (from New Zealand), buying and selling homes, creating a blended family out of our collective brood of seven I didn’t really get to confront the nitty gritty of what being homeschoolers really meant for quite some time.

Homeschooling was that thing that Brooke did while I was out at work and aside from ooohing and ahhing when I came home at the fruits of the days learning, it demanded little of me. As the product of two decades of institutional learning, I had never questioned the efficacy of the teaching I had received. School learnin’ was good enough for me and it was good enough for my kids I reckon’d.

To make matters worse, Brooke subscribed to what I came to refer to as the “guerrilla arm’ of the homeschooling movement, the death before dishonour homeschoolers, the Unschoolers. Where were the lesson plans, the assessments, where was the structure and order that I had come to identify with getting an education? But keenly aware that this was a choice that had become a central part of my family’s life and one of Brooke’s highest truths, I kept my own counsel.

I continued to ooh and ahh, but along the way I noticed some things that didn’t gel with my view on how you got educated. I saw an appreciation of Van Gogh’s finer techniques in an 8 year old. I read enlightened insights into To Kill A Mockingbird by a nine year old. And I saw a 13 year old demonstrate in depth understanding of the intricacies of international arbitrage and futures markets and use it to make a pile of (virtual) money, in a multiplayer online game.

I also began to join in the sport of “let’s defend our choices to people who have never considered any options other than the one they have accepted by default”. As a homeschool cheerleader (i.e. lots of vocal support on the sidelines, but few goals scored), I was quick to jump to the defence of the cause. I would watch my wife fielding questions at parties, poised (just ask the one about how we ensure their successful socialisation, go on I dare you!). At times I felt the sad wrath of people desperately invested in the idea that their choice of dual income, his’n’her careers and dawn to dusk childcare was the best lifestyle for their family.

In quieter moments, I marvelled at how a trip to the beach could become a chance to learn about geology (why do you think that rock is softer than this one?) or biology (what do crabs and lobsters have in common? What’s that called?) or chemistry (what do you think would happen to the can if it stayed in the rock pool?).

I developed an appreciation of the techniques of homeschooling, before I ever truly appreciated why Brooke has such a heartfelt commitment to it. Then she gave me an article to read by John Taylor Gatto. To say it influenced my attitude to unschooling is an understatement. Suddenly the ‘crowd control’ that I recalled from my own school days, education packaged for the lowest common denominator and the illusion of choice (I could study French or Italian!) took on much more confronting implications.

For the first time I questioned the choices I had made with my children, I wondered what type of life I was preparing them for and what type of childhood experiences might best achieve that. The how and the why all fell elegantly into place one day when Brooke was discussing her reasons for taking the unschooling route.

She simply said “when I decided to homeschool, I didn’t go looking for the best curriculum, the most effective way to teach my children. I asked myself, what kind of people do I want them to be at 18, what sort or curiosity, humanity and self sufficiency do I want them to possess?” Understanding that, all her choices and her unrelenting faith in their judgement all made sense.

I consider myself very fortunate to have married a homeschooler. I feed off the passion that Brooke brings to the life of our home, the home that I get to come home to everyday. I get massively disproportionate praise for the smallest thing I do to pragmatically support her and the kids with homeschooling. When I occasionally get some free time midweek, I get to hang out at ice skating, or sports days or workshops with a bunch of great kids and their caring committed parents.

And best of all, every now and then I see one of the kids go off with a little bit more knowledge, a few more pieces of the jigsaw in their possession and I get to think “I helped her discover that.” I wouldn’t trade that for all the tea in China (Where do you think that saying might have come from? Can you show me China on the map?).

HOME ED AND THE HOME